It seems that the stars, hard work and experience all aligned to bring Oscar Barton Jr., Ph.D., P.E., to Morgan State University (MSU). Before being selected this past June in a national search for the new dean of MSU’s Clarence M. Mitchell Jr. School of Engineering (SOE) — replacing Interim Dean Craig Scott, Ph.D.— Dr. Barton had a 22-year career as an engineering professor and academic administrator at the U.S. Naval Academy. He then served the last six years at George Mason University as professor and founding chair of the Department of Mechanical Engineering. George Mason, a Carnegie-classified R2 (“high research”) institution when he arrived, moved up to R1 (“very high research”) status during his tenure.

Dr. Barton’s working-class upbringing in Washington, D.C., and his higher education at two Historically Black Institutions — Tuskegee University, where he earned his Bachelor of Science in mechanical engineering, and Howard University, where he earned his master’s in mechanical engineering and doctorate in applied mechanics — had trained him to be both “a doer” and “a thinker,” Dr. Barton said.

“At Tuskegee, Booker T. Washington once had the philosophy that that institution was about creating artisans, doers, and so a lot of the programs there were experiential, experiment- based. And when I went to Howard, Du Bois’ philosophy had been that (students) become thinkers. So I had the computational, theoretical work at my graduate level,” he explained. “…I had the complement of both experiences.”

Now four months into the job, Dr. Barton is moving collaboratively and relentlessly toward the goals he has identified for the SOE, which include increasing experiential learning for undergraduates; building a junior- to senior-year professional practicum with Morgan’s industry partners; creating more experiences for graduate students to do research of consequence; and establishing industry-centric Ph.D. programs; among others.

“Morgan (now an R2 institution) has a goal of becoming an R1 institution,” he said. “It’s a tremendous, achievable goal. I think what we will have to do in the School of Engineering is to expand our research enterprise to help towards this effort.” But most important, he said, is that MSU engineering “focus on experiences that build our students’ curiosity, build their sense of passion and their sense of risk taking…. I think if you energize those attributes, they can then use the STEM tools (we provide) to become good engineers.”

Dr. Barton, third youngest of eight siblings, said he learned much from his father, a man who had little formal education but managed to build a good life for his family, and provide a higher education for most of his children, through hard work in the U.S. military (a World War II and Korean War veteran) and as a janitor for the U.S. Postal Service.

“…He instilled in us that there is a way to be successful, and that way is through education,” Dr. Barton said. “…He gave us a model that showed that it’s not what you have, it’s what you do with what you have. That’s what I believe in, and I think that’s what we need to preach to our Morgan students as a lifelong mantra.” 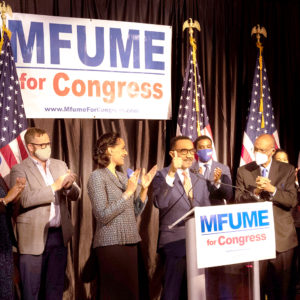 By: Kevin M. Briscoe Known for his progressive ideologies and capacity for practical compromise, Mfume has a political...