Sometimes a few of the men complained that I was there, but that did not stop me. I was just as good as they were.

Golf was long known as a “gentleman’s game,” but Morgan graduate Audrey Thomas Hill was among the women who proved the fallacy of that title.

“I was just 5 years old when I picked up a golf club for the first time,” recalled Hill, a member of Morgan’s Class of 1969. “By age 9, I’d played in my first tournament. I’ve loved the game for a long time.”

Hill was introduced to golf by her father, the late Raymond (“Bus”) Thomas.

“He worked as a janitor by day, and in the evenings he was a caddie at the white golf clubs,” said the Montgomery County, Maryland, native. “He was self-taught and a natural…he loved the game. My parents didn’t have a son, so he passed his skills down to me. My two younger sisters weren’t interested,” she chuckled. “I idolized my dad.”

Father and daughter played at the renowned Langston Golf Course, established in 1939 in Washington, D.C. Situated on the banks of the Anacostia River, Langston was an early haven for Black golfers in an era of segregation when other public golf courses catered to whites only. According to Cultural Tourism DC, the name of the course pays homage to John Mercer Langston, a 19th century abolitionist, diplomat and attorney who was founding dean of Howard University’s Law School and the first African American to represent Virginia in Congress. 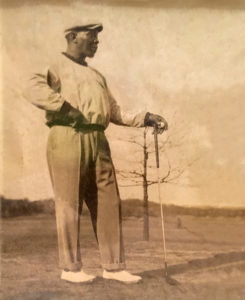 Members of the Wake-Robin Golf Club — founded in 1937 and the oldest registered African-American women’s golf club in the country — pushed federal officials to desegregate the public courses of the nation’s capital. According to the club’s website, the group’s petition led to Langston’s construction and eventually influenced officials to open public golf courses to all.

Hill fondly remembers the facility as a hub of activity for area residents and even celebrities.

“You saw everyone,” she recalled. To wit, boxing champion Joe Louis, singer Billy Eckstine and a host of top Black golfers such as Charlie Sifford were guests over the years. Lee Elder, the first African American to play in the Masters Tournament, managed the course at one point.

Hill was among the Black women and children who teed off at Langston. Constructed on the site of an abandoned trash dump, the site wasn’t fancy, but that didn’t diminish anyone’s game.

“My father had me practice for hours,” said Hill. “If I didn’t get it right, Dad would say, ‘Nope. Do it again.’ Sometimes I had tears in my eyes. I worked hard at it.”

An opportunity to go pro at 16 didn’t pan out, but her athletic prowess and dedication paid off when it was time for college. Hill initially planned to attend Texas Southern University. But unbeknownst to the future coed, her mother, their minister and educators in the community had applied to Morgan on her behalf.

“I was accepted and given a scholarship,” she said of her enrollment in 1965 as a physical education major. “From the start, it was a wonderful experience.”

Hill was a four-sport varsity athlete who was mentored by Morgan coaching legend Effietee (“Mama”) Payne and assistant coach Erta Franks. One day, the freshman was approached by the men’s golf coach, Mr. Bowie. “I hear you’re Bus Thomas’ daughter and quite the golfer,” she recalled him saying. “There was no women’s golf team, so he told me, ‘Come and practice with the guys.’ I did. We would see who could drive the ball the farthest or who was the better putter. Sometimes a few of the men complained that I was there, but that did not stop me.” She laughed. “I was just as good as they were.” 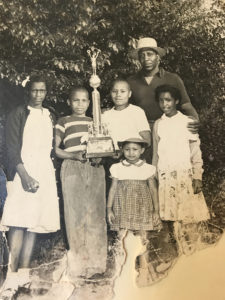 Audrey Thomas (front) at age 5, at Langston Golf Course in Washington, D.C., with her father and kids from their neighborhood in Rockville, Maryland (1952)

In 1968, Hill’s junior year, the NCAA admitted women’s golf and tennis programs from Black colleges. (They did not admit sports such as football and basketball until later.)

That same year, the East Coast Regional Women’s Golf and Tennis Tournament was held at the University of Maryland, College Park — the first NCAA tournament to which Historically Black Colleges or Universities were invited.

“My coaches at Morgan told me they were going to pay my entry fee for me and one of our tennis players to go,” said Hill. Her father, thrilled at the news, volunteered to be his daughter’s caddie. “He cleaned and shined my clubs.”

On tournament day, Hill took extra care ironing her uniform — a navy “skort” and a white shirt with Morgan’s blue and orange logo. Once on the College Park campus, she stood out among the white golfers from as far away as Maine and Florida.

“I was the only little Black girl on the bus,” she recalled. “People were looking at me, wondering what I was doing there.”

Hill faced off against a white student from Florida who was also accompanied by her own father.

“She had on a pink skirt, pink visor and a matching pink golf bag,” Hill remembered. “She looked fancy, but I was proud of my Morgan outfit.”

As the game began, stressed nerves were evident, and the other young woman became flustered and made mistakes. The young woman’s father yelled at his daughter, repeatedly. Hill will never forget her own dad saying, “ ‘Don’t look at her. Don’t feel sorry for her.’ He kept telling me that golf is a mind game.”

It was a glorious day. I won the golf tournament, and our tennis player (Bonnie Logan) won the women’s singles tournament.

When all was said and done, Hill outswung, outmaneuvered and outplayed her competitor. Yet when the two women took their scorecards to the table of all white judges in the clubhouse, there was skepticism.

“One judge looked and said, ‘Can anybody verify these scores?’ It was the girl’s father who spoke up,” Hill recalled.

Later, when her name was called as the winner, she gasped as the Morgan section erupted with gleeful cheers and the judges handed her a trophy.

“It was a glorious day,” Hill said, the joy still evident in her voice. “I won the golf tournament, and our tennis player (Bonnie Logan) won the women’s singles tournament.”

Today, Hill is retired after more than four decades in education: she had a 34-year career as a secondary school counselor for the Montgomery County Public Schools then served 11 more years as a counselor and professor at Montgomery College.

Married with an adult son and a grandchild, Hill gives highest precedence to her faith and family these days, but she has played with her husband at courses around the Delaware-Maryland-Virginia region and will always love golf.

And Morgan still holds a place in her heart: she attended her 50th class reunion in 2019 and had a grand time.

“Once upon a time, you only heard of white golfers or saw them on TV. I am proud of the history we made at Morgan,” Hill said. “I hope there will be another generation of Black women golfers.” 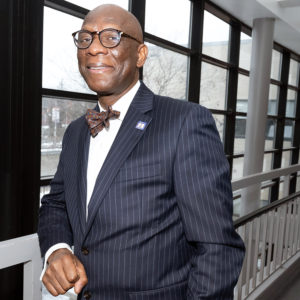 By: Eric Addison It seems that the stars, hard work and experience all aligned to bring Oscar Barton Jr., Ph.D., P.E.,...