More than 30 years after he was first elected to Congress, Morgan State University (MSU) Board of Regents Chairman Kweisi Mfume has returned to Washington to again represent Maryland’s 7th Congressional District in the U.S. House of Representatives. As a “new-old” congressman, Mfume arrived in Capitol Hill focused on an aggressive set of legislative priorities.

Mfume, 72, said he will maintain his role in setting the strategic direction of the University while serving in Congress.

“We all have priorities in life. Morgan is a priority for me,” said Mfume, who has stepped down as board vice chairman of Research America, a health advocacy group, to devote more energy to both Morgan and Congress. “I’ll devote less time to some other things, but it’s a matter of balance.”

On campus, Mfume leads an active board that now is overseeing the execution of the University’s strategic plan, which involves enhancing student success, promoting the University’s status as a doctoral research institution, improving campus infrastructure, growing Morgan’s resources and engaging with the community.

“The direction of the University has its genesis at the board level, but it’s executed by (University President) Dr. (David) Wilson, Mfume said. “We’ve established a line of demarcation between overreach and oversight, and (we) work together with a very good president.”

Simone Lonas, from Toledo, Ohio, a 21-year-old MSU senior and vice president of the Student Government Association, had good things to say about the board under Mfume’s leadership.

“The board has done a good job of making sure that student voices are heard and considered,” said Lonas, who was anticipating enrollment in law school at Atlanta’s Emory University last fall. “And all of the decisions made so far have been what the school has needed.”

“(My agenda) juxtaposes the current administration’s agenda, but not the House of Representatives’. Most of the (House) members feel very passionate about it,” Mfume said during an interview in September 2020, before the election. “But we still have to fight and not worry about the opposition.”

Mfume minced no words when asked about his opponent in the general election, Kim Klacik, an African-American Republican who made waves last year with a viral campaign ad showing a blighted, run-down area of the 7th District, which also encompasses affluent sections of Baltimore and Howard Counties.

“Hers was an interesting concept of, ‘I don’t take any responsibility; I’m just the whistleblower.’ If she cared, she’d live (in the district), not in Middle River,” he said. “She also omits that the conditions are likely the result of historically documented redlining, a byproduct of withholding loans to certain ZIP codes, and development dollars and small business loans going to Port Covington rather than North and Penn. Every four years, Republicans discover Black people who drink their Kool-Aid.”

With the election behind him, Mfume is free to concentrate on his two roles and two distinct constituencies.

To Morgan students, he paraphrased Booker T. Washington: “ ‘Cast your bucket down.’ Make Morgan your priority. It’s the fastest four years of your life but the most consequential.”

For the people of the 7th District, he added: “Thank you. I’m not a perfect servant, but God calls us to a perfect mission. Thank you for seven years on the (Baltimore) City Council, 10 years in Congress and nine years at the NAACP, and another opportunity to serve you in the House of Representatives.” 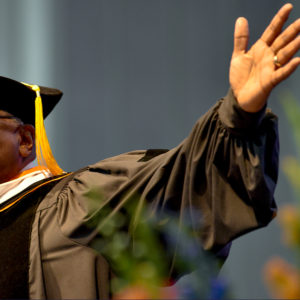 Fall Speakers Called on Morgan Graduates to Excel and Persevere.Pride was in the air on Dec. 14, 2019, as nearly 500 bachelor’s,...