It would be hard not to notice anything that happened to be standing in the location —    overlooking E. Cold Spring Lane and Hillen Road, at the western edge of the main campus — but, then again, the striking design of Morgan State University’s (MSU’s) Calvin and Tina Tyler Hall would attract attention anywhere.

(The building) creates a new dynamic between the students and the staff on campus.

Kim McCalla, MSU’s associate vice president for Facilities, Design and Construction Management, led the teams that helped determine the units that would occupy the building and that developed the building’s design.

“The building was reprogrammed in 2011 and 2016…. The design actually started in 2016 (with the commencement of funding), and construction started in 2018,” she explained. “With Tyler Hall sitting on a prominent corner…and being a gateway building, it was important for us to make sure that 1) we had a building that would easily service the students, one Morgan would be proud of and 2) would be a good transition between our traditional and our modern-looking buildings…. We spent time, over a year, working and refining the look, feel and texture of the building, taking into con- sideration how Truth Hall, Cummings and Baldwin Halls looked in conjunction with the library, the student center, then the proposed Tyler Hall. We wanted a modern structure to reflect the future, and we worked to respect the tradition with coloring and stone.”

Did her teams hit their targets?

“Yes. I think we very much achieved the goals, and we’re very pleased with the building,” McCalla reported. “We’re also pleased that (the building) creates a new dynamic between the students and the staff on campus.”

Central to that new dynamic are a building layout that facilitates staff interaction within and between departments, and a “one-stop” location named Bear Essentials just inside the front door of the facility, for greeting visitors and starting the student services process. The Bear Essentials unit is led by a Morgan alumna, Chevaun Whitman.

Keisha Campbell, MSU registrar, is one of a number of Tyler Hall occupants we spoke with who report being very pleased with their new accommodations. Her team was previously divided among offices on three floors of the aging Montebello complex, near the north end of the campus.

“This facility is so much nicer. Just to have everyone together is so great. And I think it will also improve interaction on our team,” Campbell said. “Actually, we do have two spaces, because our Veterans Engagement team will not be sitting in the same space with us. But the exciting part is I will be able to see everyone! For team-building purposes, that helps, when we bring in new staff.” 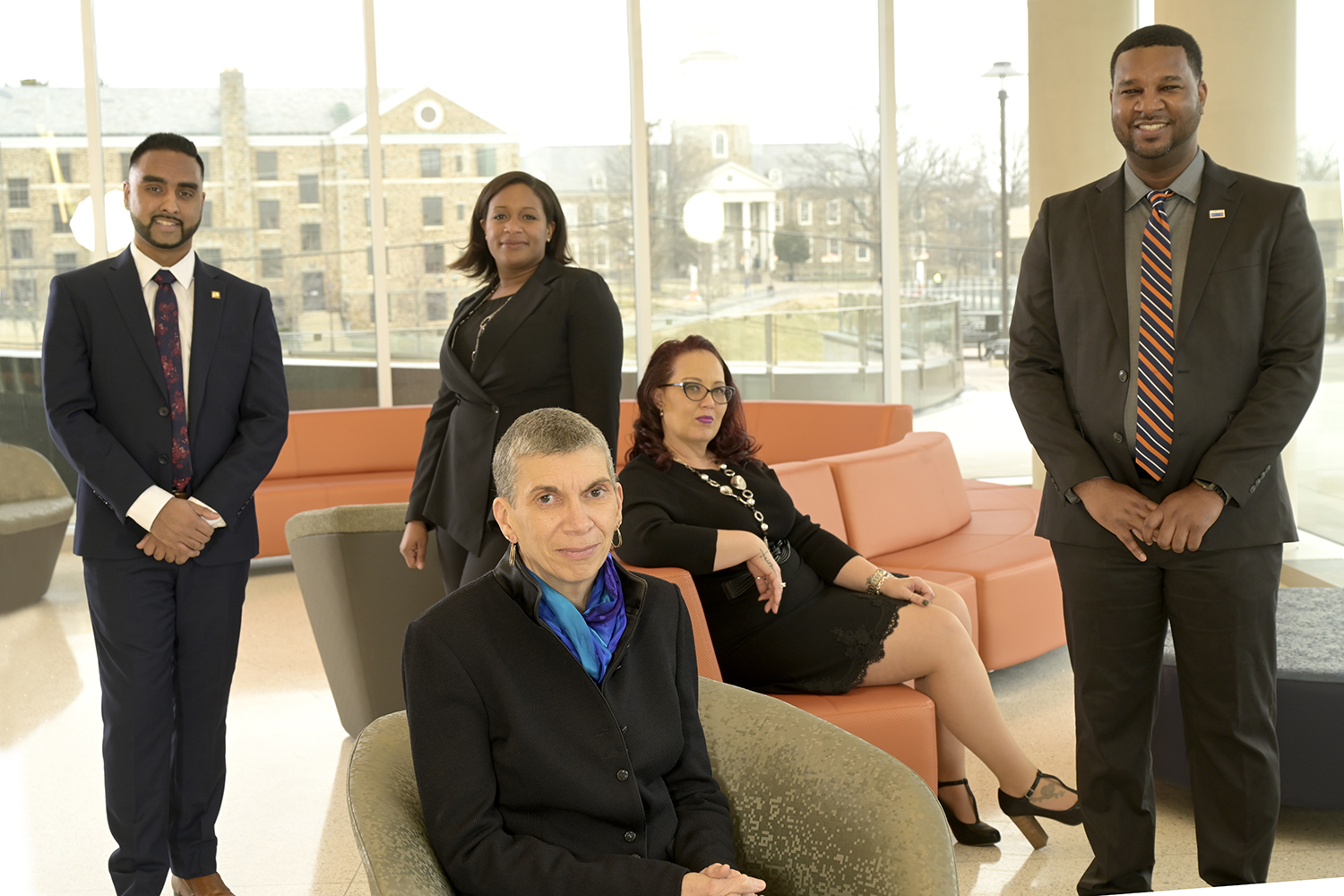 “…The natural light is very bright and airy and open, and I think it lends itself to a lighter demeanor. It’s just a much nicer building. Let’s be real,” she added with a laugh.

Seana Coulter, director of Morgan’s Center for Career Development, reported that her unit moved from Montebello to Tyler in July.

“We were overjoyed with our new accommodations and couldn’t wait to welcome students/alumni and employer partners to our new center,” she said. “Our Center is absolutely beautiful. It is fitted with state-of-the-art equipment. We have a dedicated computer lab that students may use to take career assessments, search for jobs and internships, create resumes, etc. We have rooms dedicated to virtual interviewing that students may use to interact with employer partners. We have multiple spaces that employer partners may utilize to conduct interviews, host information sessions or con- duct career development workshops.” 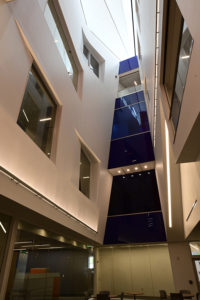 “We are thrilled to be located centrally on campus,” she added. “It is our hope that the new location will make us more accessible to students and we will no longer be the ‘best kept secret’ on campus.”

Ernest Brevard Jr., Ed.D., a special assistant in Morgan’s Enrollment Management and Student Success (EMASS) Division was one of the few staff members working full-time in Tyler Hall this past fall, as many of the building occupants continued working remotely during the COVID-19 pandemic. He and EMASS Vice President Kara Turner, Ph.D., are building captains for the facility, responsible for handling deliveries to the building, coordinating tours and office entries and serving as the first points of contact for matters involving the Physical Plant and the Design and Construction Management and Police and Public Safety Departments.

“I really love our new space,” Dr. Brevard reported. “Dr. Turner and I came from Truth Hall. We did not have a storage area or a kitchenette or our own conference room in our space. So there were scheduling conflicts at times, and we just had to be accommodating and reschedule or move things around. But here in this new space, we gained a conference room inside our suite, as well as a storage area and a kitchenette.”

Morganites can look forward to an official celebration of Tyler Hall’s opening, later this year. The ribbon-cutting ceremony for the facility was originally scheduled for October 2020 but was postponed because of the pandemic.

Success in Inclusion and Local Hiring

Morgan State University had a goal of excellence for the design and construction of its newest building, Tyler Hall, and it also set high standards for the project with regard to inclusion and community impact. The data show that MSU was successful on all fronts.

Funds spent with minority business enterprises (MBEs) on the design portion of the project totaled approximately $2.8 million, or more than 41% of the contract value, exceeding the goal of 40%. The 34% participation rate of MBEs in the construction contract likewise passed the project goal (30%) and sent $22.1 million to minority-owned enterprises.

Morgan set a target for Tyler Hall’s construction manager, Barton Malow Company, to hire 19 individuals who resided within the Morgan Community Mile, a 12.2-square-mile area within a one-mile radius of the campus, where the University has committed to engaging in university-community partnerships to make the community a better place to live and work. By the time the project was completed, in April 2020, Barton Malow and its subcontractors had made 51 such local hires, including 16 project management staff: 268% of the goal.

Rochester, New York, native Brian Goodykoontz, 35, brought his growing family to Towson, Maryland, in 2009 when he landed a construction management job with Barton Malow. He later moved to downtown Baltimore City then to a house within the Morgan Community Mile, closer to his work as a project manager on Tyler Hall. He’s grown close to his teammates, who include a number of Morgan students and graduates, Goodykoontz said, and he was instrumental in Barton Malow’s search for local hires.

“We started that process very early on, when we were (on-boarding) our subcontractors. We wrote into our project manual about local employment, and we wanted to make sure we were encouraging them (to do that)….” Goodykoontz said. “And then when the project started, we actually hosted a career fair here on campus for the community, to make sure that they were getting exposure to the subcontractors…. There were some success stories, some local hires that came out of that.” 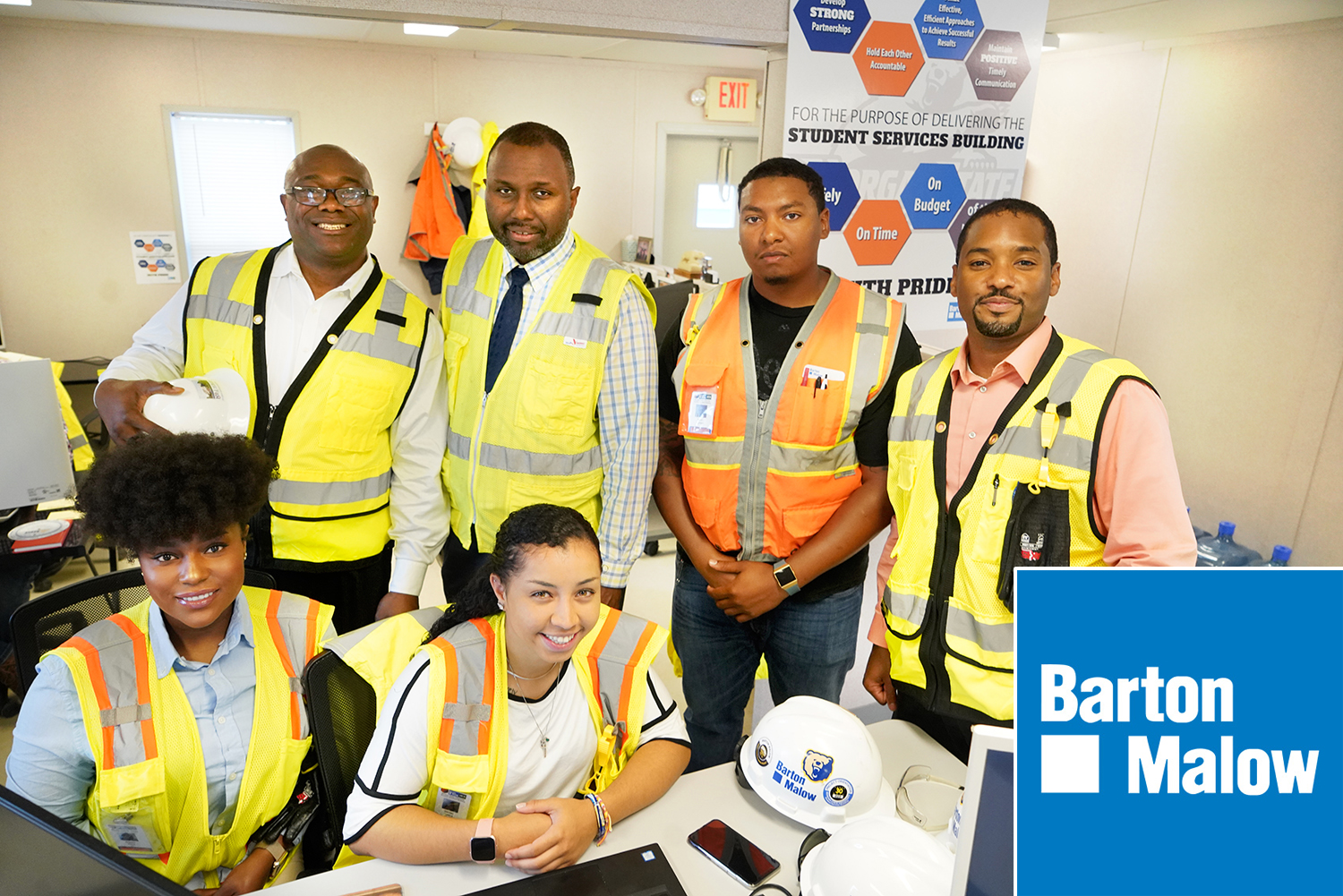 Damali Young of Morgan’s Class of 2019 stayed close to her alma mater and took a job as a project engineer at Barton Malow after her stellar career as a Bears scholar-athlete. She said she may stay in the city long term.

“I really do like the area. My sister goes to school here as well…and we want to stay in this area through her graduation. But I’ve fallen in love with the city and made a lot of good connections here,” said Young.

The Tyler Hall project was special to her, she added, “because I live close by, I go to school here (and) all my friends still go to school here. So having them and other people tell me, ‘Oh, the building looks so good,’ makes me feel pride, because I know that I helped contribute to its success.”

Baltimorean Crystal West, another Morgan graduate, felt the same. She worked on Tyler Hall as an employee of JLN Construction Services, LLC, a subcontractor of Barton Malow on Tyler Hall. Her employer’s managing member, Namdi Iwuoha, was a strong supporter of the local hiring effort.

“It’s special mainly because I went (to Morgan); I have two degrees from here. So it’s a personal project for me,” said West, who lives within the Morgan Community Mile and plans to remain in the city. “So when I’m coming back for Homecoming and I see this building, (I say,) ‘I was a part of that.’ ”

Baltimore native Benjamin P. Morgan, vice president for Barton Malow, said he believes the Tyler Hall project can be a model for employers seeking to empower the local community.

“…What I’ve learned is that no matter what you do, you can always do more. That’s the lesson behind this,” Morgan said. “…If you look at just this example, if every company would do just a small part of that, Baltimore would change, Maryland would change. And that’s what should be mandated for all companies…to just do that.” 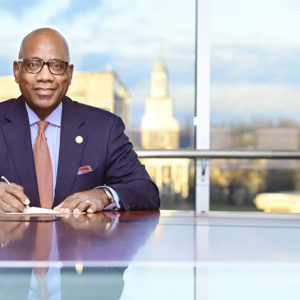 This past summer, David K. Wilson, Ed.D., hoped to commemorate the 10th year of his presidency of Morgan State University...