Stephanie Nellons-Paige knows that the roots of her successful career are anchored in her upbringing in Baltimore City and her education at Morgan State University. Nellons-Paige, a member of Morgan’s Classes of 1981 and 1985, lived her early years in the Flag House public housing project, near Baltimore’s inner harbor, after her family lost their home to a title scandal. There were 13 children in the Nellons clan, from her father’s two marriages, and Nellons-Paige, next to last of the siblings, said she learned early to assert her influence by “managing up” through the hierarchy of her elder brothers and sisters, some of whom were older than her mother. She said that skill came in handy in the corporate world.

Neither of her hardworking parents had a higher education: her mother, “the CEO of the household,” had a high school diploma, and her father, who always worked numerous jobs, left school earlier, which was not unusual for an African-American born in 1903. But the couple made pursuit of a college degree a high priority for their children, including the girls.

“My father’s last words and continuous words to us were, ‘Go to school, get yourself a good education, a good job…and find yourself a good husband like your sister Nora,’ ” Nellons-Paige recalled with a laugh.

Her eldest sister Nora and Nora’s husband, Eric Simmons, a successful businessman, had a large, comfortable home in Syracuse, New York, and were gracious hosts and influential role models when she spent summers there, Nellons-Paige said. “They taught this little girl from the projects how to work a room and make every interaction count.”

I thought, ‘What can I do to make the city more livable?’ And so I majored in urban studies to change the trajectory of lives.

So I majored in transportation, because I figured I could fix the bus system…. I realized that transportation is the social and economic vitality of an individual and a community.

As college age drew closer for her, Nellons-Paige took note of the experience of her older brother Victor and her nephew Freddie attending Howard University. In particular, she noticed how desperately they ate during weekend stays at her home.

“These guys showed me that if you go off to school somewhere, you might starve to death if nobody was coming to get you every week to feed you,” she said. “…So I decided I needed to go to school closer to home so that I could eat.”

Nellons-Paige was mentored by sorors of Delta Sigma Theta Sorority, Inc., who ran an academic support program — Direct Search for Talent — for students at her high school. She credited the Deltas, along with her First Apostolic Faith Church family, with getting her through the trauma of her father’s death when she was 15 and keeping her on the path to college. Then, when she decided to attend Morgan, the sorority helped her find much-needed financial assistance. She said that is why she is a Delta today.

“Morgan was a real financial struggle for me,” she said. “I did get grants and loans to go to school, and I also worked. I was the ‘kitchentician.’ I was that girl who could perm, cut and curl hair. I was the barber and the beautician.” She also held jobs at Soper Library, at a bank and at several retail clothing stores that gave her welcome discounts for apparel purchases. Besides needed income, the work, especially styling hair, brought her many good relationships.

“I became pretty popular,” she recalled.

Her choice of urban studies as her undergraduate major was born at Baltimore’s inner harbor during her childhood, where she spent time with friends playing and imagining how beautiful the dilapidated area would look with her aesthetic touches. The Rouse Company’s development of Harborplace preempted her plan, but her desire to improve urban life remained.

“I thought, ‘What can I do to make the city more livable?’ ” she explained. “And so I majored in urban studies to change the trajectory of lives.”

Her decision to study transportation management at the master’s level was likewise guided by personal experience. As a student at Morgan, she relied on the #8 bus to get to class, but the bus was late so often that a professor threatened to fail her because of tardiness.

“So I majored in transportation, because I figured I could fix the bus system,” she said. “…I realized that transportation is the social and economic vitality of an individual and a community.”

Today, Nellons-Paige has more than 25 years’ experience as an executive and advisor in workforce development and economic inclusion in the private and public sectors. She and her husband, Rod Paige, former U.S. secretary of education (2001–2005), have a consulting firm, Nellons-Paige Group, Inc., which is based in Houston, Texas , the city to which she relocated in 2007, shortly after her daughter graduated from high school. Her consulting, through their company, for the transportation, food service and facilities management industries led to an important role in the nearly $25-billion Texas high-speed rail project.

“I was leading the business and workforce opportunity strategy,” she explained, “to make sure, number one, that we have the workforce that’s needed, by working with colleges and universities and the school districts to get students trained in this technical field and connect them with the international companies responsible for building and operating the railroad, and, second, to make sure small, rural and minority- and women-owned businesses were included in building the system.”

Her expertise and her willingness to give honest counsel have brought her appointments to the boards of several organizations, among them the Gulf Coast Workforce Board and Ancora Education, a multistate network of for-profit technical schools. Houston Mayor Sylvester Turner appointed her to the city’s Minority and Women Business Ecosystem Assessment and COVID-19 Health Equity and Response task forces. Last October, Texas Gov. Greg Abbott appointed her to the Board of Regents of Texas Southern University, a position that provides another outlet for her passion to help students of all ages. She previously led a successful mentoring program at Roderick Paige elementary school in Houston and enjoyed engaging with students at Jackson State University while her husband served as interim president there. Continuing her services to youth, she is national co-chair of fund development for The Links, Incorporated and fondly remembers her days as a campus mom visiting her daughter, Danielle, and Danielle’s friends at Spelman College. Danielle is now an executive for Aramark.

Nellons-Paige is also active with a group of Black business executives who recently launched the Houston Fund for Social Justice and Economic Equity. The group’s initial goal was to raise $25 million to advance its mission, including financial support of Black-owned technology companies.

Her physical distance from Morgan’s campus hasn’t diminished Nellons-Paige’s involvement with her alma mater. She is a regular at the annual Homecoming Gala, where she purchases a table, and she sponsored an appearance of the MSU Choir at The Links, Incorporated’s National Assembly in Las Vegas, Nevada, in 2016. Most recently, she made a generous gift to the Transportation and Urban Infrastructure Department of Morgan’s Clarence M. Mitchell School of Engineering, to fund scholarships, outreach and student recruitment.

Clearly, the Houstonian is still connected to her roots in Baltimore.

“I do want to come back home one day,” she said. 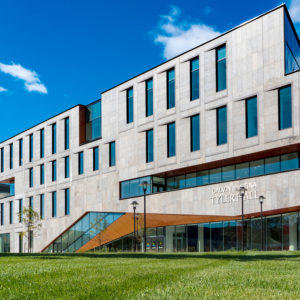