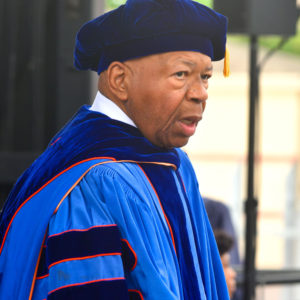 “You, each and every one of you,
are better and more valuable to our
country because of the obstacles that
you have faced and overcome.”
— U.S. Rep. Elijah Cummings

More than 925 bachelor’s, master’s and doctoral candidates received their degrees at Morgan State University’s jubilant 143rd Spring Commencement Exercises, which included a ceremony for undergraduates on May 18, 2019 and a School of Graduate Studies ceremony on May 16. U.S. Rep. Elijah Cummings, a member of Morgan’s Board of Regents, was the guest speaker for the Undergraduate Ceremony, held in Hughes Memorial Stadium. Retired New York Times sports columnist, journalist and author William C. Rhoden of Morgan’s Class of 1973 received an honorary Doctor of Humane Letters during the ceremony. More than 100 members of Morgan’s Class of 1969 led the procession into the stadium and were honored as representatives of the 50th anniversary class, a day after Morgan’s Alumni Day luncheon, where the class announced its $1.4 million in giving to the University in 2018.

Morgan’s Class of 2019 was rich with success stories reflecting the institution’s diversity.

Alexis Samuels is a self-described “military kid” and former “nerd,” who was born in Germany and grew up in Texas, Tennessee and in Frederick, Maryland, where she attended a predominantly white high school before following her mother’s and sister’s example to attend an Historically Black Institution. A Travelers EDGE scholarship paid her tuition and fees and provided internships with Travelers during her four-year Bachelor of Science program in actuarial science. She accepted a full-time position as a software engineer with JPMorgan Chase.

Lucas Krusinski, a native of France, arrived at Morgan unable to speak English but determined to play for the men’s tennis team, which is the 2019 MEAC champion. Now fluent in English, and a Class of 2019 valedictorian, he has an MSU bachelor’s degree in nutritional science and is pursuing a doctorate in food science on a fully funded fellowship at Michigan State University.

Withelma T. Ortiz Walker Pettigrew, a.k.a. T. Ortiz, received her Bachelor of Science in strategic communication, with honors, and joined the Baltimore Child Abuse Center as the anti-trafficking and anti-exploitation coordinator. Her 11-year journey through higher education came after she suffered years of childhood sexual, physical and verbal abuse and had become a nationally recognized advocate for children. A native of Oakland, California, she came to Baltimore homeless in 2014, the same year she was recognized as one of Time magazine’s “100 Most Influential People.”

Dominic Dingle received a Master of Science in sociology during the School of Graduate Studies Commencement and was commissioned with eight other MSU students as a U.S. Army second lieutenant, during a Morgan Bear Battalion ROTC ceremony the next day. Morgan’s first graduate student to receive an ROTC commission, and the son of U.S. Army Maj. Gen. R. Scott Dingle of Morgan’s Class of 1988, Dominic is now at his first duty station, Fort Carson, Colorado, with his wife, Deliana, beginning his military career as a member of the sports staff for the 10th Special Forces Group. 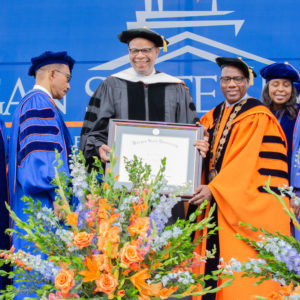 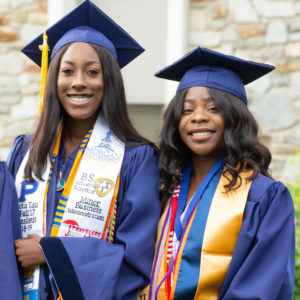 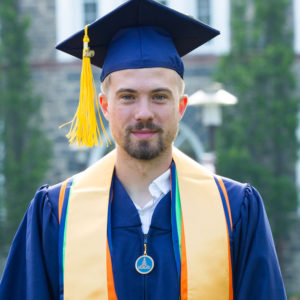 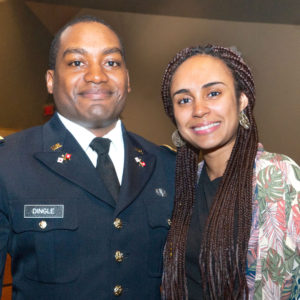 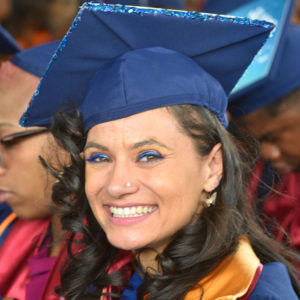 “Life flourishes most at the crossroads where two diverse ecosystems meet,” said Congressman Cummings in his address. Drawing on his own childhood experience, Cummings spoke of the power of diversity to lead the U.S. past what he called a “critical crossroads” for the nation.

Growing up in an underserved area of Baltimore City, Cummings said, he attended a poor school and was assigned to “the third group” of students, what is now known as special education. He recalled wondering how the words “liberty and justice for all” in the Pledge of Allegiance applied to him, and he remembered being disparaged by a school counselor for aspiring to be a lawyer. Later, when he had become a lawyer, he realized he was a rare Congressional expert in special education, and he was able to advance legislation to support special ed.

“You, each and every one of you, are better and more valuable to our country because of the obstacles that you have faced and overcome,” Cummings told the audience. “….Your life experiences and your educational achievements are essential elements of our potential to lead our nation during a very difficult and challenging time.”

“…Appreciate the value of our democratic republic in its hour of peril,” Cummings said. “…Call upon the challenge and education that you have received at this great institution, and stand up for our democracy in your own communities.”

In her salute to the graduates at the Undergraduate Exercises, Senior Class President Emani Majors (B.S., construction management) called upon Morgan’s newest alumni to disregard titles and instead search for their mission, their “why.” Master’s degree candidate Stanley Jenkins (M.A., African American studies) and doctoral candidate Valerie Riggs (Ed.D., urban educational leadership) inspired the audience with their salute to the graduates at the School of Graduate Studies Commencement. 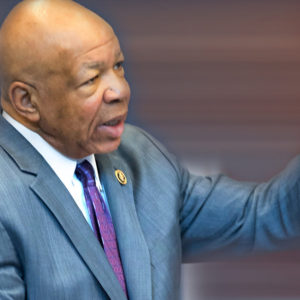