Despite his long bout with a rare form of cancer, Elijah E. Cummings, Maryland congressman and Morgan State University (MSU) regent, left many shocked and saddened by his passing on Oct. 17, 2019, at age 68. MSU President David Wilson, Ed.D., was among his countless colleagues and constituents for whom Cummings was like family. The two had spoken by phone regularly and exchanged text messages frequently.

“He reminded me of my third oldest brother, Charlie,” Dr. Wilson recalled. “They had a lot of similar characteristics. They were very passionate about the things that they believed in. They cared deeply about others. They were deeply rooted in their community. And then, my family and I grew up on a sharecropper’s plantation in rural Alabama. (Cummings’ parents had also been sharecroppers.) So I think it was no great surprise that Elijah and I had this very special connection, because we understood what it meant to grow up in an environment like that.

“…I never really had to guess where he stood on issues,” Dr. Wilson continued. “I never had to guess whether he had an agenda other than the success of things that we had undertaken at Morgan and how he could support me to ensure that the University continued to improve in quality and expand its programs and its opportunities for our students.”

Kweisi Mfume, a 1976 MSU graduate and chair of Morgan’s Board of Regents since 2012, likewise describes a brotherly relationship with Cummings. The two young men met in 1978, when both were just becoming politically active in west Baltimore. Mfume was the first to run for and win elected office — Fourth District councilman in Baltimore City — and Cummings followed four years later, making a successful run for the Maryland House of Delegates with the support of one of his mentors, Delegate Lena K. Lee. U.S. Rep. Parren J. Mitchell of Maryland, also a Morgan graduate, later mentored Cummings and was a role model for him during Cummings’ time in Congress.

“We were brought up in two households separate and apart that pretty much relied on the same basic things, and those things were values,” Mfume said. “Both Elijah and I were taught separately in our homes to fight hard for what you believe in, play by the rules, don’t cheat, love your country, cherish your faith, respect your (elders), and believe in yourself. And it’s kind of hard getting away from basic values like that…. When we talked, we realized almost immediately that we’d been raised in different homes, but the same lessons were there…. As we got older, Elijah and I would always talk about what those basic values mean in a home and how it can change the life of young people.”

“Life flourishes most at the crossroads where two diverse ecosystems meet.”

Born in Baltimore City in 1951, Elijah Cummings was the third of seven children of Robert and Ruth Cummings, who came to the city from South Carolina, where they had worked as sharecroppers. Elijah grew up in a religious household during the de jure segregation of the 1950s and ’60s, as his mother followed her calling from domestic work to establish a church.

In the public schools in the underserved neighborhoods where he lived, Elijah was relegated to “the third group” of students, what is now called special education. But defying expectations, he became a stellar academic achiever, eventually earning a bachelor’s degree in political science from Howard University — where he served as student government president and graduated Phi Beta Kappa — and a J.D. from the University of Maryland School of Law.

He was elected to the Maryland House of Delegates in 1982, beginning his career of public service, and served there for 14 years, becoming the first African American elected as the body’s speaker pro tempore. In 1996, he was elected to the U.S. House of Representatives, taking the seat that had been held by Kweisi Mfume before Mfume resigned to lead the NAACP.

During his 23 years as Maryland’s congressman from the Seventh District, Congressman Cummings became world renowned as a warrior for social justice, working continuously to ensure that the next generation had access to quality healthcare and education, clean air and water and a strong economy defined by fiscal responsibility. At the time of his passing, he was chair of the House Committee on Oversight and Reform and a senior member of the House Committee on Transportation and Infrastructure. But his national and international following never diminished Cummings’ obvious love for his hometown of Baltimore City or his beneficial impact on Morgan.

“Life flourishes most at the crossroads where two diverse ecosystems meet.”

U.S. Rep. Elijah Cummings, a member of Morgan’s Board of Regents, was Morgan’s Spring Commencement Speaker on May 18, 2019.

Cummings was appointed to the MSU Board of Regents in 1999 and served on the body for 19 years. Mfume said the congressman was very thoughtful but often slow to speak in the position, rarely revealing to the public what Mfume said was one of Cummings’ defining characteristics: his great sense of humor.

“He was very, very deliberative on every issue. And Elijah would listen,” Mfume said. “He wouldn’t always have a lot to say as issues were coming before us or being presented in board meetings. But when he did have something to say, he was right on the money with it.”

Dr. Wilson readily recounted a few of what he said were many instances of Regent Cummings’ assistance to Morgan.

“He put us in touch with several major corporate partners when he saw opportunities for our students. As a result, we were able to put in place numerous internship programs at Morgan, and we have students who are now serving in those internships,” Dr. Wilson reported. “We have a thriving partnership with Wells Fargo, where we have eight to 10 Morgan students now engaged in fellowships or internships.”

“He also was a big proponent of extending the Pell Grant to year-round, during the first term of the Obama administration, to enable more low-income students to be able to finish college within four years,” Dr. Wilson added. “And, indeed, we went to a year-round Pell for a couple of years, and Morgan saw tremendous benefits from that. But then that stopped (during the current president’s administration), and (Cummings) was really working with us to try and get that back on track.”

“And the first big win I was able to achieve when I came to Morgan came as a result of his intervention,” Dr. Wilson recalled. “That was in 2011, when we were able to sign a cooperative agreement with NASA, in a partnership with the Universities Space Research Association, USRA, valued at about $96 million, of which Morgan’s share would be $28.5 million. Elijah had met Fred Tarantino, the president of USRA, and basically said to him, ‘I think you should sit down and have a conversation with my good friend David Wilson at Morgan.’ Then he called me and said I should expect a call from Fred. And I did, shortly thereafter.”

In the end, Morgan’s proposal — in collaboration with USRA, Ball Aerospace & Technologies, I.M. Systems Group, The Johns Hopkins University and The Institute for Global Environmental Strategies — won the bid for the laboratory agreement, “but we would not have even been in the competition had Elijah not put us together with USRA,” Dr. Wilson said. “We’ve been in this now for over five years, and NASA and USRA have decided to extend it for another five years, which will bring to nearly $40 million the total amount that Morgan will receive from this collaborative agreement over a 10-year period.”

“I can think of so many other things that Elijah has helped us to do,” Dr. Wilson said, “but these are the ones that loom large.” 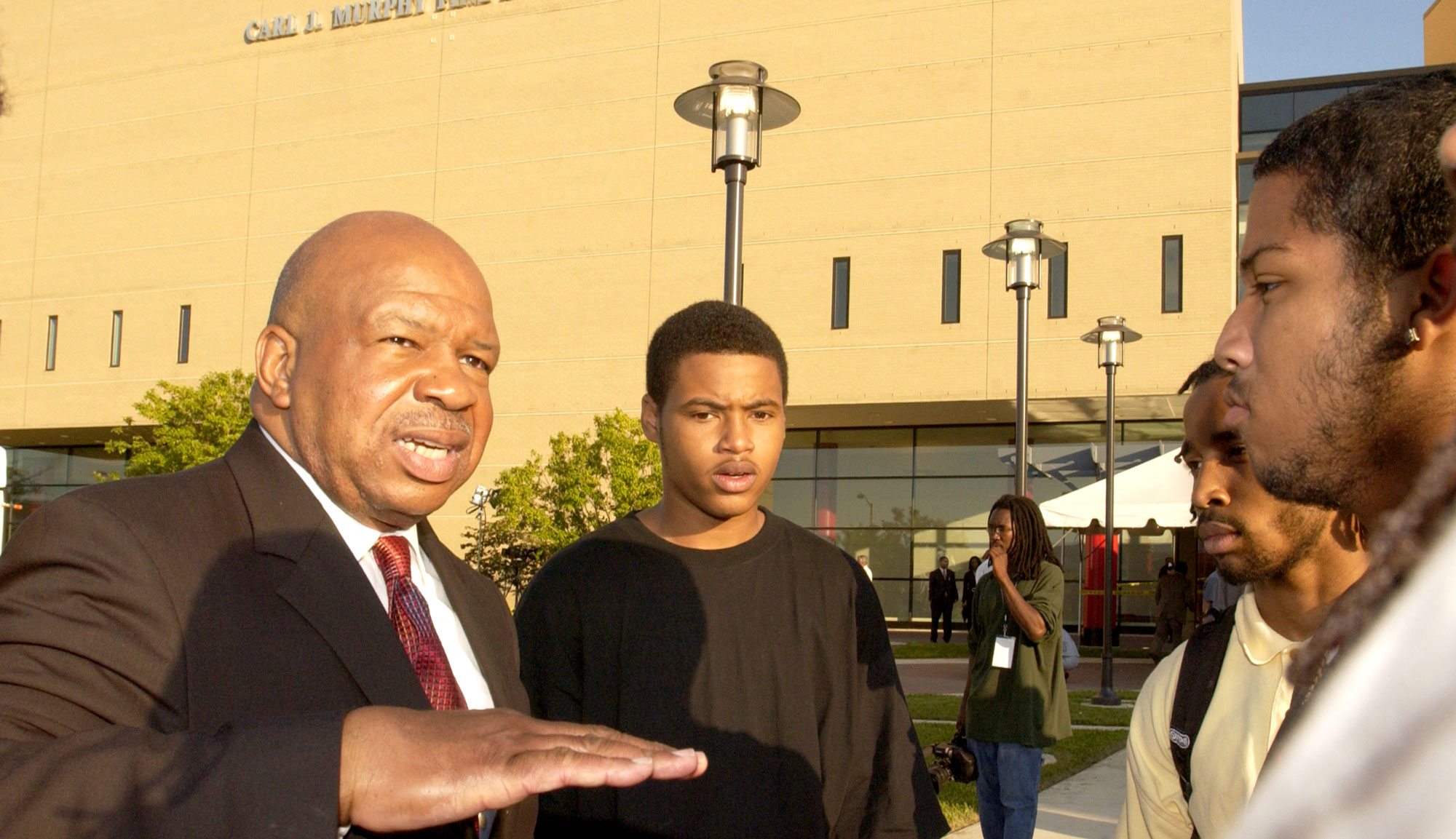 U.S. Rep. Elijah Cummings became a global icon in Washington, D.C., but he wanted the world to know he was a son of Baltimore City. On Oct. 23, 2019, thousands of Baltimoreans took advantage of the opportunity he had given them to say their goodbyes. Following the arrange-ments the congressman had made with his family during his long battle with cancer, Cummings’ body lay in repose for more than 12 hours at the Carl J. Murphy Fine Arts Center, on MSU’s campus, for a public viewing, followed by special presentations from fraternal organizations and a tribute service for the public.

The diversity of the crowd on hand to pay their respects during the viewing in the Fine Arts Center’s Gilliam Concert Hall reflected Cummings’ true humanity and dedication to social justice and equal opportunity.

“Elijah is a figure in this community unlike any other,” said Baltimore businessman Wally D. Pinkard Jr. “In my lifetime, the only other I can think of (like him) is Pete Rawlings: men who transcended race, who had incredible values and who stood up for principles.” He and Cummings worked together on numerous projects in the community, said Pinkard, who holds a number of leadership positions including president of the France-Merrick Foundation. “He had so much energy. It’s amazing what he did in the last months of his life.”

“The reason I came out today is to pay my respects to a man who made constant efforts to change Baltimore City, and he did a really good job during his time in politics,” said Morgan student Jeremiah Taylor, a sophomore civil engineering major from Baltimore City. His parents also liked and respected Cummings, Taylor added, and his peers benefited from the congressman’s initiatives such as the Elijah Cummings Youth Program’s Israel Experience. 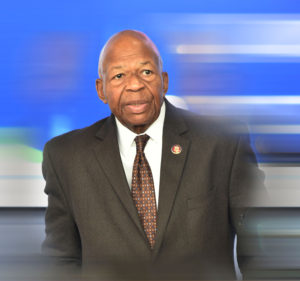 During the tribute service, 27 speakers paid homage to the late congressman and regent, including elected officials, religious leaders, personal friends, and individuals who had collaborated with him in serving the community.

“He would investigate, legislate and agitate, but when he agitated it was never for himself. It was always for others,” said retired U.S. Sen. Barbara Mikulski, who served with Cummings for 17 years in the Maryland congressional delegation. “…He did not ask people to give up their anger. He talked to them in justice, discrimination, redlined, sidelined. What he did was to take all of that anger and passion and to channel it into bringing about change.”

“He was so genuine. He was so authentic. He was so real. He didn’t get caught up in all the trappings, all the accoutrements of the position. He was a person who led with his heart. And I connected to him on that level,” said MSU President David Wilson. Later, Dr. Wilson said, during the unrest in Baltimore City in 2015, “I was so deeply moved as I would turn on the television each night, and I would see Congressman Cummings in the street, fighting every single night…. I will forever remember the tears that were welled in his eyes as he was fighting with all of his heart and all of his soul to restore peace to our great city of Baltimore.”

Congressman Cummings’ funeral was held on Friday, Oct. 25, in Baltimore City, at New Psalmist Baptist Church, where he was an active member. He is survived by his widow, Maya Rockeymoore Cummings, Ph.D., and daughters, Jennifer J. Cummings and Adia Cummings.

© Morgan State University // All Rights Reserved
Back to top