This year, the renowned TV show American Idol gave Lagoke her biggest opportunity to share her talents with the world.

Holding a number of distinctions, any one of which alone would make for a life well-lived, Morgan State University graduate Funmike (“Funke”) Lagoke is a female equivalent of a jack-of-all-trades. In addition to being a music teacher, vocal performer and a reigning beauty queen, Lagoke is now a budding recording sensation, thanks to her recent stint on ABC’s American Idol.

Born in Washington, D.C., Lagoke, 28, spent her early years in Nigeria, on the other side of a stark economic and social divide.

“In Nigeria, they don’t have as many necessities as we do here, like running water and consistent electricity,” said Lagoke. “But, I was forced to speak my language and hone into my culture, to really just educate myself naturally by being around my people.”

After a year in London and a brief return to Nigeria, Lagoke and her family returned to the D.C. suburbs, just in time for her attendance at middle school, where she experienced another culture shock.

“Coming back was different,” she said. “I faced a lot of bullying as far as my singing voice or how I was too dark or I wasn’t pleasing to the eye. Nigeria was more accepting of me because we all looked the same.”

Despite the bullying and body-shaming, Lagoke pushed on. At the urging of her high school choir director, she auditioned for and became a member of the famed Morgan State University Choir, under the direction of Eric Conway, D.M.A. Upon her graduation with a Bachelor of Arts in music, in 2017, she became a vocal instructor and music teacher in the Baltimore City Public Schools, while also touring the country with the MSU Choir as the featured soloist in Hannibal Lokumbe’s “Healing Tones.”

“Fumi, as I affectionately know her, has an exceptional and rich contralto voice who has the talent to go far in music,” Dr. Conway said. “She was an anchor to my alto section.”

In 2019, she was also crowned Miss Nigeria U.S.A., winning on a platform of “Promoting Performing Arts in Education.”

“I stand so proudly when it comes to my culture,” Lagoke said. “It was beyond the glamour of the pageant that got me involved: it was the platform to be an artist.”

I stand so proudly when it comes to my culture. It was beyond the glamour…that got me involved: it was the platform to be an artist.

This year, the renowned TV show American Idol gave Lagoke her biggest opportunity to share her talents with the world. But, alas, it also became perhaps her most controversial. After several “pre-auditions,” Lagoke went to San Diego to audition before the show’s three celebrity judges — Lionel Ritchie, Katy Perry and Luke Bryan. Her rendition of the Leon Russell classic “A Song for You” impressed the judges and earned her a “golden ticket” to Hollywood. Although she continued to wow them with her contralto-to-soprano range, she did not perform on-air until the “Duet Round.”

“The Duet Round was challenging for my partner, and I poured so much of me into (helping her) with her part but not pouring enough into myself,” Lagoke said.

After a spotty performance with partner Ronda Felton, the judges were divided, with Perry inclined to send Lagoke home. As Ritchie was beginning his critique of their performance, Lagoke passed out, hitting the floor face-first.

“I heard him say, ‘That was a train wreck,’ ”she recalled. “I didn’t hear anything else.”

After being rushed to a nearby hospital, she was treated for dehydration and received three stitches for a gash to her chin.

Meanwhile, the judges decided to bring both singers back the very next night for the “Showstopper Round,” where Lagoke’s American Idol journey came to an end.

Although she shrugged off her departure from the show with a cheerful optimism (“Everything happens for a reason.”), Lagoke has been publicly critical of American Idol producers’ handling of the incident.

“As a performer, you want to be highlighted in the best way possible, and every time that I was reminded that I was going to get showcased for this fall, the line I keep telling myself is, ‘I am so much more than my fall,’ ” she said in an Instagram Live message to supporters. “I pray that America and whoever (witnessed the fall see) that even when we fall in life, we’re going to get back up again.”

These days, Lagoke has returned to her dual passions of teaching and making music and is planning to release an EP record of new music — “soul, with a hint of Afrobeat” — in a month.

“I found my purpose in everything I do,” she said. “When it came to teaching, I was supposed to inspire my kids and give them something they never had. When it came to the pageant, I had to spread awareness about my culture and my people. As for performing, that’s the gift God wants me to use.” 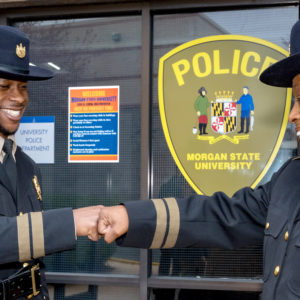 Morgan State Police Department Is a Family Affair Nancy Harvey’s early life was a struggle, a struggle that continues....