Nancy Harvey’s early life was a struggle, a struggle that continues. But she says the spring of 2021 is a high point of her life.

“(Growing up) on welfare (in Baltimore City), abandoned by both parents, having a child at 16 years old, I never thought I would be a police officer with two wonderful kids, and having my son follow in my footsteps. I’m living in my own Disneyland right now,” she said. “I’m blown away, especially when I think about walking across that stage (at Commencement).”

Harvey is a senior applied liberal studies major at Morgan State University (MSU), slated to graduate with a Bachelor of Science this May — the first person in her family to receive a college degree. Harvey is also a 10-year veteran of the MSU Police. Her son, Larry Ray, received his Maryland Police Training Commission certification last October at the Prince George’s Municipal Policy Academy and is also working full-time now with the MSU Police.

“I didn’t know Larry was going to follow in my footsteps…,” Ofc. Harvey said. “He always looked at me like he was proud of me, and of course I was in his ear about it as well, like, ‘Maybe you should do law enforcement.’ But I never thought he would take it on and do it himself.”

Ofc. Ray, 33, agrees that his mother’s example was a boost, but he also points to MSU as an early source of motivation. Taking a political science class at Morgan in 2013, he said, he learned that much of the treatment he and his friends received from the police was wrongful when he was growing up in east Baltimore, and that the relationship between the police and the community had changed for the worse since the 1970s and ’80s.

Ofc. Harvey said she also chose a career in law enforcement to improve her community.

Harvey joined the Baltimore City Sheriff’s Office as a deputy sheriff in 2003 and served there for seven years before making a lateral career move to the MSU Police.

“I came to Morgan so my kids could go to school free — Larry and my daughter, Troy,” she explained. “And I wanted to (set an example) for my family by getting a college degree.”

Taking her new job at Morgan was not a difficult adjustment for her.

“Coming from the Sheriff’s Office, working in the courthouse, seeing Black young men coming in and out of jail, it was making me sick,” she admitted. “I said, ‘I know I can’t stop what’s going on in this court system, but at least I can go (to a college campus) and stop them from going to jail.’ ”

Ofc. Harvey and Ofc. Ray recall the trauma of losing a close relative — Harvey’s brother and Ray’s uncle, Anthony Anderson — who died while being arrested by Baltimore City Police officers in 2012. Now, the mother and son both say they strive to connect with people on a human level in their police work. Ofc. Harvey said many Morgan students call her “Auntie” or “Ma,” and that now, with her son on the force, she has a bigger campus family. Ofc. Ray reported that after the mental and physical challenges of completing the academy during the pandemic (He and his daughter contracted COVID-19 during that time, in July.), he is enjoying the atmosphere of policing and the camaraderie of the other officers. And he’s looking forward to having more interaction with the MSU students and staff when the public health crisis is over.

Ofc. Harvey is looking ahead to new challenges in her community, in the next chapter of her life.

“I’m ready to go into advocacy for youth or the homeless,” she reported. “If I can do both, I will.” 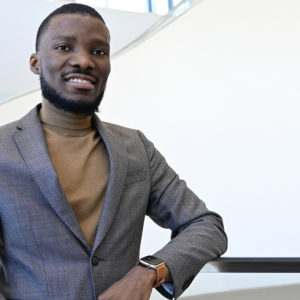 By: Eric Addison Stanley Nwakamma’s position as Morgan’s student regent is one of many noteworthy items on his already...