Stanley Nwakamma’s position as Morgan’s student regent is one of many noteworthy items on his already impressive resume.

When Stanley Nwakamma was growing up on his family’s poultry farm in Imo State, Nigeria, his dreams of a higher education in the U.S. were nurtured by a gift from his uncle. The gift was a souvenir teacup that was displayed in the family’s living room.

“My uncle went to Morgan State University, and the teacup has ‘Morgan’ written on it…,” he said. “I knew a number of people who went to Morgan, and they were very successful.” 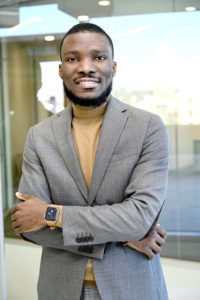 Nwakamma’s mother, who is a high school principal, and his father, who heads the farm, are both college-educated, so Stanley had strong role models for his future. He was also an excellent student in high school. But he knew early on that money to fund his dream would be scarce.

“My dad tells me that the very day I got a full scholarship from Morgan was the happiest day of his life,” Nwakamma said. “That was like his wildest dreams coming to reality.”

Today, Nwakamma holds a 3.92 grade point average as an electrical and computer engineering major at Morgan, where he is also serving a one-year term as the student regent on the University’s Board of Regents, helping govern the institution as a voting member of the 13-member board. The board position is one of many noteworthy items on his already impressive resume. A Martin D. Jenkins scholar, Clara I. Adams Honors College student and resident assistant at Morgan, the committed campus leader has proudly represented the University at high-profile events and as a University Innovation Fellow. He also serves as the Thurgood Marshall College Fund Ambassador for MSU and has served as an intern at major technology companies including Facebook and Apple, where he worked in Cupertino, California, as an Apple HBCU scholar this past summer.

Nwakamma’s short-term plans include completing his bachelor’s degree program; seeking employment with his ideal employer, Apple, as an electrical engineer; and earning master’s degrees in business and in artificial intelligence/machine learning. In the long term, he wants to return to Nigeria, invest in his parents’ farm and bring in advanced technology to expand the business.

Serving as student regent during the COVID-19 pandemic has been one of his greatest challenges, he admits, but one that he still relishes.

“Deciding whether to keep the campus open or opt for remote instruction was a very tough decision,” he said. “I voted for going virtual…. It wasn’t most popular with the students, but I believed that it was in the best interest of everyone and their safety.”

“I love that I am a proud ambassador of Morgan State University…” said Nwakamma, “and being the student regent is one of the highest ways I can serve my campus community.” 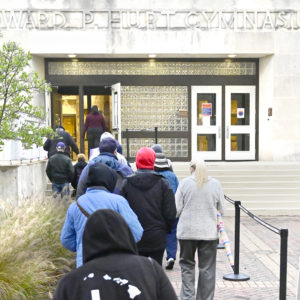 By: Eric Addison By objective measures, the 2020 U.S. election was truly as historic as many predicted. More than 159 million...