Simon Nyaga, Ph.D., an associate professor of biology at Morgan, is developing a test that identifies faulty genes and could help doctors stop pancreatic cancer before it develops.

When U.S. Rep. John Lewis announced his struggle with pancreatic cancer this past December, he joined a growing list of high-profile individuals diagnosed with the disease: Alex Trebek, Aretha Franklin, Steve Jobs, Sharon Jones, Dizzy Gillespie and Supreme Court Justice Ruth Bader Ginsburg, among others. But the condition is not exclusive to celebrities, of course. Nearly 57,000 people in the United States are expected to receive the diagnosis this year, according to the American Cancer Society.

One researcher at Morgan State University is striving to lower pancreatic cancer’s death rate. Simon Nyaga, Ph.D., an associate professor of biology, is developing a test that identifies faulty genes and could help doctors stop pancreatic cancer before it develops.

“We know that cancer cells divide much faster than normal, healthy cells,” Dr. Nyaga said. “They’re able to outsmart some of the biological processes that are there naturally to get rid of them.”

At present, advanced-stage pancreatic cancer has no cure. Patients diagnosed with stage 4 pancreatic cancer typically live only three to six more months, although some may live longer. Because the condition is so deadly, early diagnosis is critical to prolonging one’s life. However, pancreatic cancer is tough to pinpoint. In most cases, the disease is so far advanced when initially diagnosed that treatment proves too little, too late.

Scientists still aren’t sure of the cause of pancreatic cancer, but Dr. Nyaga suspects cell trauma triggers the onset. In particular, he notes, exposure to oxidative stress — the same process that causes rusting of metals — makes healthy, functioning cells behave abnormally. Dr. Nyaga believes that faulty genes play a major role in the onset and/or progression of the disease. To date, his team has identified more than 100 abnormal genes in pancreatic cells that may be associated with carcinogenesis, the production of cancer.

Deoxyribonucleic acid, or DNA, is made up of three basic building blocks: ribose (a sugar), phosphate and nitrogen-containing bases. DNA is shaped like a winding ladder with four bases that unite in pairs to form the ladder-like rungs. Of these bases, Dr. Nyaga said, one named guanine is more damage-prone than the rest. 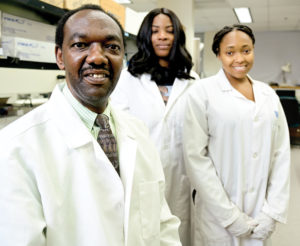 Oxidative stress alters guanine’s structure, converting it to an abnormal version of the nucleic acid, called 8-hydroxyguanine (8-OHG). Normal guanine partners with the cytosine base, but 8-OHG partners inappropriately with adenine base. The faulty pairing alters the DNA’s instructions that tell cells how to make certain proteins. Among the corrupted proteins are those that either repair DNA damage or suppress the growth of cancer cells. The unfortunate result is uncontrolled cell growth or cancer.

Following his hunches that oxidative damage of DNA triggers the development of pancreatic cancer, Dr. Nyaga and his team are developing a test that detects abnormally expressed genes and proteins. His aim is to develop a test that not only detects pancreatic cancer early but is also affordable.

“There is a breast cancer test in the market based on the Breast and Ovarian Cancer Susceptibility gene (BRCA 1) in breast cancer, but it is so expensive that very few people can afford to get tested,” Dr. Nyaga said. “I want my test to be available to everybody.”

A native of Kenya, Dr. Nyaga was moved by fate, and some luck, in his journey to the U.S. Earning the top score on a national biology test landed him a spot in Kenya’s International Laboratory for Animal Diseases. He agreed to work there for a year in exchange for the institution’s full funding of his bachelor’s degree at a university in the United Kingdom. However, when the promised matriculation failed to materialize after three years of service, the multilingual scientist began exploring new prospects.

An American laboratory colleague suggested that Nyaga consider universities in the U.S. He was admitted to several but eventually settled on Texas Southern, an Historically Black Institution.

After earning his bachelor’s degree in biology with honors in 1992, Nyaga pursued his Ph.D. in biochemistry and molecular biology at the University of Texas Medical Branch in Galveston, Texas. He graduated in 1998 and went on to pursue postdoctoral research at the National Institutes of Health (NIH), where he stayed on as a staff scientist.

Although the focus of his research at the National Institute of Aging was studying DNA repair in breast, prostate, skin and pancreatic cancer, Dr. Nyaga was not oblivious to his surroundings. Recognizing the lack of diversity, he approached his adviser about recruiting a more diverse group of scientists. The response surprised him.

“My supervisor welcomed the idea,” Dr. Nyaga said. “He said they wanted to improve diversity but weren’t sure exactly how.”

With his boss’ blessing, Dr. Nyaga began recruiting students of color to the NIH’s summer research program, often at Historically Black Colleges and Universities. Since then, several of his student recruits have earned advanced degrees and landed professional or faculty positions at various institutions. Proud of his impact, Dr. Nyaga believes his tenacity and desire to promote diversity at the NIH more than 20 years ago have made a difference.

Since joining Morgan, Dr. Nyaga has mentored many students in his laboratory and has continued mentoring them even after they have left his charge. Two of his past trainees recently graduated with Ph.D.s and are pursuing postdoctoral research — one at a prominent university and the other with the National Academy of Sciences. Another recent trainee is a Ph.D. candidate at Brown University, and yet other is pursuing a master’s degree in biotechnology at The Johns Hopkins University.

Clearly, Dr. Nyaga leaves a legacy wherever he goes. 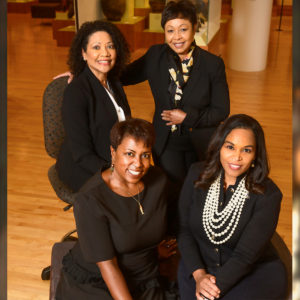