A unit of Morgan’s Earl G. Graves School of Business and Management, EDAC provides activities geared toward “anyone who’s looking for resources to start operating or grow their business.”

As director of Morgan State University’s Entrepreneurial Development and Assistance Center for the past 15 years, Omar Muhammad has embraced a mission dear to his heart: “Connecting budding and existing entrepreneurs to resources for venture management and growth.” Leading the center, which is better known by its abbreviation, EDAC, is work for which he was well-prepared, long before he earned his bachelor’s degree in accounting from Morgan in 1993 or his master’s degree in technology entrepreneurship from the University of Maryland, College Park, in 2015, Muhammad said.

“My parents got me started with this when I was a kid,” he recalled. “I have two brothers and two sisters, and my parents said, ‘There’s too many of you to give an allowance. Start a business.’ So we had a candy store in our basement.”

Role models such as Baltimorean Reginald F. Lewis, the first African American to own a business with more than $1 billion in sales, boosted the motivation Muhammad’s parents had instilled in him, and by the time he arrived at Morgan as a student, he was a full-fledged entrepreneur: “I had a T-shirt company. I had a mobile car wash. I picked up cars from Giant (Food Store’s) parking lot, took them to my parents’ house, cleaned them and returned them.”

Maryland Congressman Parren J. Mitchell, a Morgan graduate and a strong advocate for economic development in African-American communities, continued Muhammad’s guidance down the business path by mentoring him and a number of other promising black entrepreneurs. 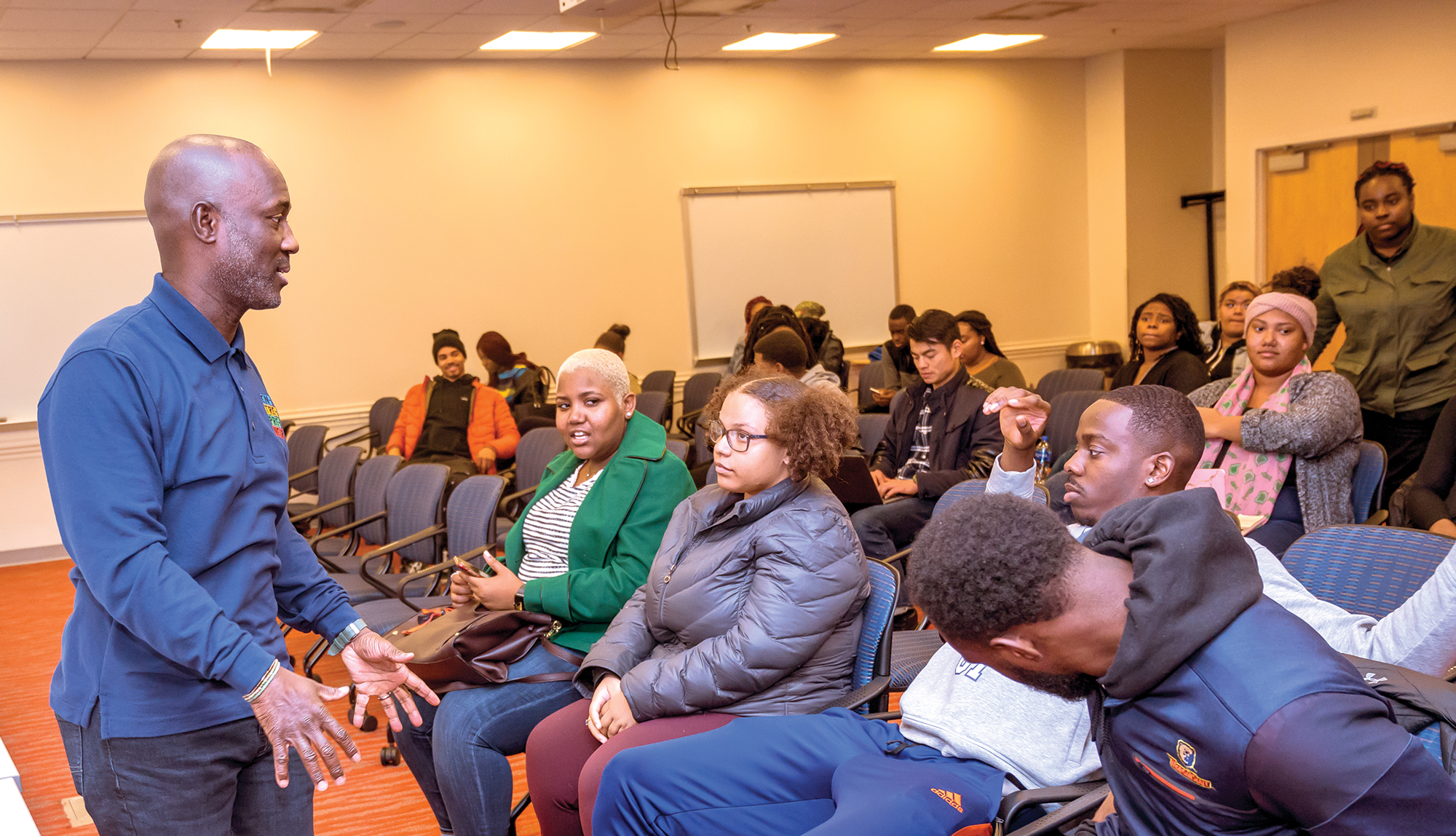 A unit of Morgan’s Earl G. Graves School of Business and Management, EDAC provides entrepreneurship classes, workshops, pitch competitions, conferences and other activities geared toward “anyone who’s looking for resources to start operating or grow their business,” Muhammad said. The center, established in 1992, has focused on children, teens and preteens as well as adults over the years, presenting programs such as “BizTech Kids,” for budding businesspeople aged 10 to 14, and a program named “Make It Happen,” funded by music mogul Kevin Liles, a Morgan alumnus, for 11th graders. Recent EDAC events included a W.O.M.E.N. (Women-Owned and Managed Enterprise Network) conference, a Maryland Military and Veteran Women Business Conference with Morgan graduate Andrea Garris Jackson and a “MNDSET Conference” on entrepreneurship for millennials. Planned events include a conference for black fathers who are entrepreneurs and a “Side Hustle Summit” virtual conference for current or prospective business owners who are also full-time employees. 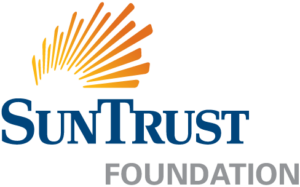 SunTrust Foundation supported EDAC’s “Side Hustle” program with a $75,000 grant and recognized the center’s work with a Lighting the Way Award, in August. Presenting the award, Stan Little, president of the SunTrust Foundation, called EDAC one of its local, nonprofit partners “that empower and strengthen the communities they serve. EDAC is making a meaningful impact with its programs to improve the financial well-being of the people who need it most.”

EDAC has a small staff: Muhammad, director, and Yvette Racks, administrative assistant. But it continues to make a large, beneficial impact on Morgan and the broader community. Muhammad would like to see that impact be even larger. 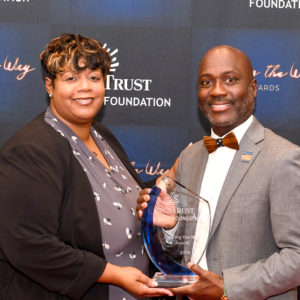 SunTrust Foundation supported EDAC’s “Side Hustle” program with a $75,000 grant and recognized the center’s work with a Lighting the Way Award, in August. 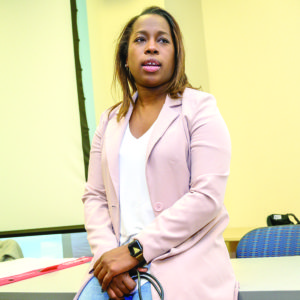 “Morgan students, staff, alumni and faculty are interested in entrepreneurship, and they’re starting businesses. But we could start many more. My role is to help make that happen over the next couple of years,” he said. “Also, I’ve noticed that many of our entrepreneurs have service-based companies, and I’d like to see more of them be product-based.”

Muhammad sits on the board of the Maryland Technology Development Corporation (TEDCO) and is a member of the Morgan Entrepreneurship Alumni Chapter, a group whose mission is to maintain a network of MSU alumni entrepreneurs to promote business opportunities and serve as a resource for entrepreneurial development for students, the University and the surrounding community. For 20 years, he was host of a radio show about entrepreneurship on Morgan’s WEAA Radio, and he now produces several podcasts on the topic and writes a column in the Baltimore Business Journal. Like many successful advocates, Muhammad sees his work as a lifestyle, and he works intentionally to influence everyone close to him with his mission, from business associates to family members. His wife, Natasha, is a 2006 graduate of Morgan and owns several businesses, including a not-for-profit company that helps youth aged 10 to 18 develop an entrepreneurial mindset and start businesses. His four daughters — aged 12 to 34 — have all been entrepreneurs also.

Muhammad said his ultimate goal for EDAC clients is what he calls LEGACY, his acronym for “legacy building,” “economic opportunities,” “global competitiveness,” “asset building,” “community building” and “your personal development.”

“LEGACY is why entrepreneurship is important,” Muhammad said. “It’s why we continue to do what we do at EDAC.” 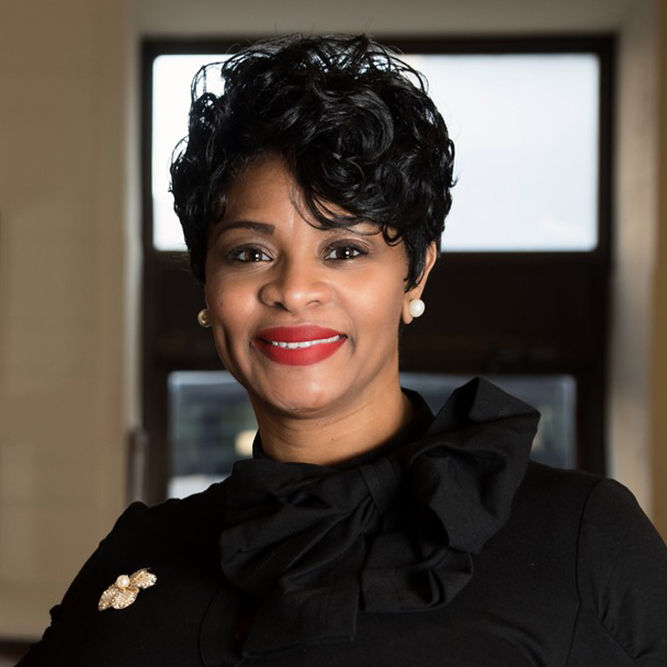 Andrea Garris Jackson sought out EDAC’s services in the late 2000s. The Hampton, Virginia, native and U.S. Army veteran had been downsized from her job auditing developers for their compliance with rules regarding inclusion of minorities, women and local residents as contractors and employees in their projects. A Morgan graduate in political science (B.S., 1993), Jackson was very familiar with the center by then and knew Omar Muhammad as a classmate. Encouraged by her former employer, Jackson decided to launch a third-party compliance monitoring company to continue her previous work. EDAC, she said, gave her “the basic foundation and education to start my business, understand how to operate it and keep it running successfully.” Today, she reports that “I have made my first million” as head of DPN Group, LLC, a company that has served as third-party compliance monitor for the Johns Hopkins Science and Technology Park for the past 10 years and has numerous other high-profile clients. Jackson is also chair of the board of Stadium Place, in Baltimore City. 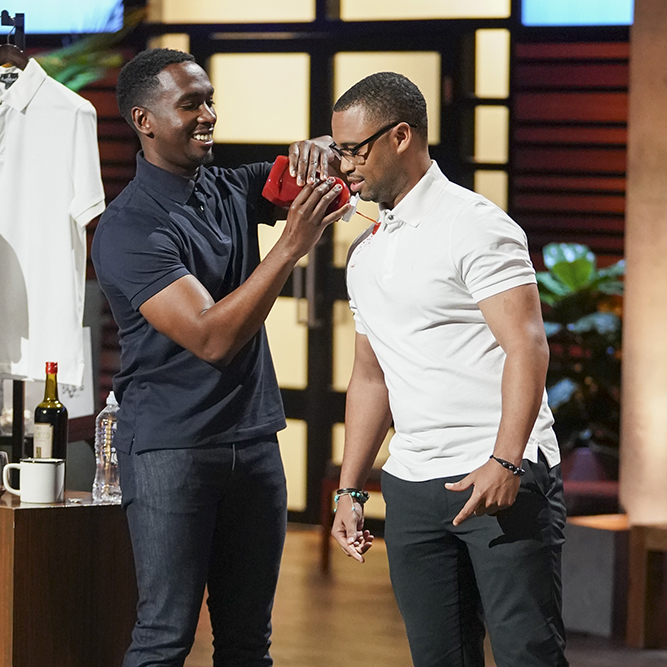 As an undergraduate in finance in Morgan’s Earl G. Graves School of Business and Management, Brandon Davenport spent many hours at EDAC, working as a student intern and participating in the center’s classes, the Entrepreneurship Society, the business plan competitions and other activities. So by the time he graduated from MSU in 2006, he felt prepared for business ownership. 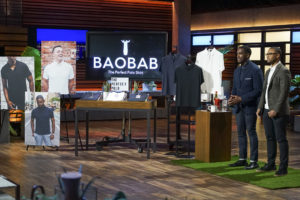 The Baltimore native started his first business, a mobile-device advertising technology company named Vesta Mobile Solutions, in 2007, with a friend, Hampton University graduate Marcellus Alexander III, and sold the company in 2010. The two launched their current company, Baobab Clothing, a maker and distributor of high-quality, high-tech polo shirts, in 2018. Davenport and Alexander are now seeking venture capital to grow Baobab, a search that led them to a national TV appearance on ABC’s Shark Tank this past October. 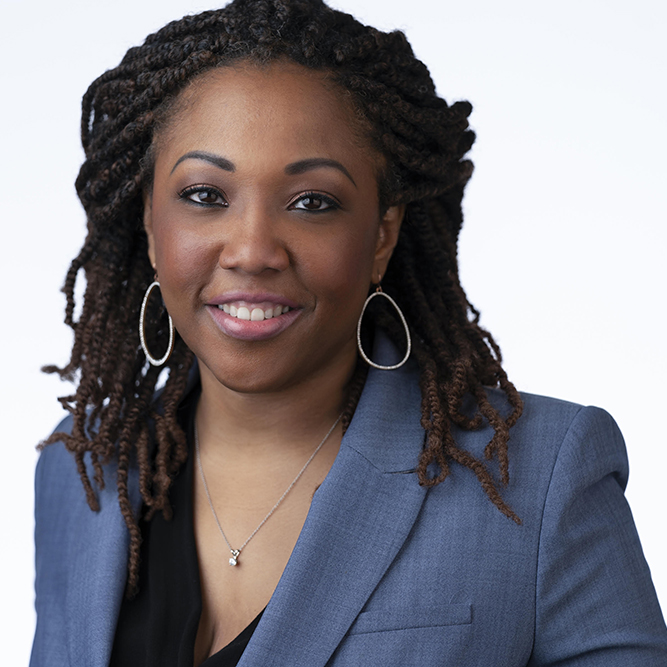 Likia Hawkins’ Morgan education has brought multiple career benefits, including her involvement with EDAC. The Maryland native leveraged her B.S. in information science and systems to become a government contractor in her profession. Six years ago, she launched Steel Point Solutions, LLC, an information technology solutions services company supporting the U.S. intelligence community and Department of Defense (DoD). In 2015, the company applied for the DoD’s Mentor-Protégé Program, to enhance Steel Point’s ability to pursue larger federal contracts. In this initiative, her Morgan ties benefited her again, as did the network she had established at IBM while employed there for nearly eight years. Hawkins learned that IBM provides training to its protégés through EDAC. Through this program and the work of her employees, partners and clients, Steel Point, based in Calverton, Maryland, has grown to 40 employees in eight states and is on track to increase its 2019 annual revenue by 80 percent. Hawkins reports that the company is well positioned for further growth. 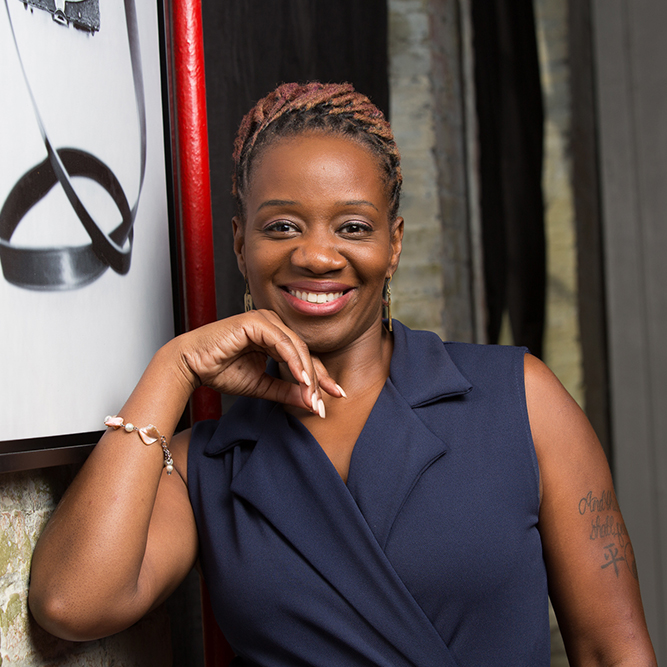 Tiffany Lymon, from the Bronx, New York, has two academic degrees from Morgan: a B.S. in international finance (1999) and an M.B.A. with a concentration in management information systems (2002). But one experience outside the classroom, working for EDAC for two years during her time as an undergraduate, turned out to be very important to her current work. Lymon launched her second business, Tiffany Ignites, in 2013. The seven-employee enterprise includes a fitness studio in Harford County, Maryland, and also trains and coaches clients in personal wellness and professional development. EDAC provided her with marketing ideas and financing options to get the businesses off the ground.

“Omar and Yvette were always able to help me, either directly or by pointing me toward someone who was able to help me,” Lymon said. “EDAC is definitely a very good resource for individuals who are either starting a business or are in business.” 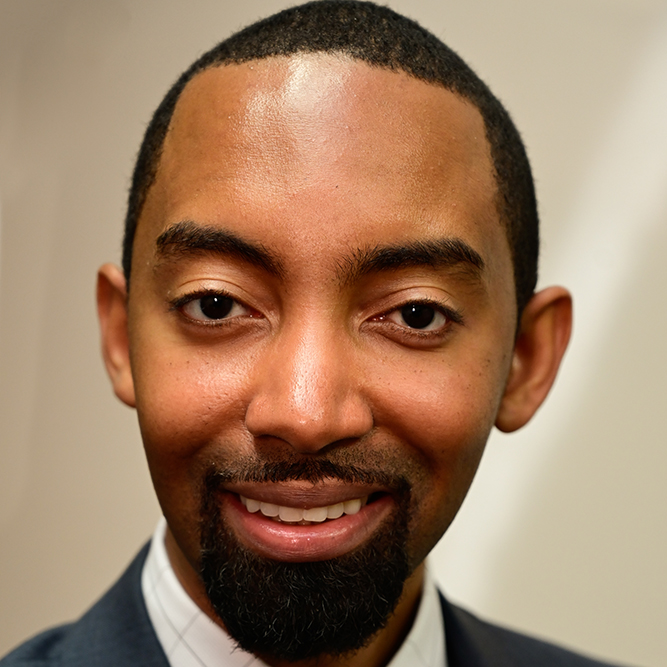 Sam Henry’s interest in entrepreneurship dates back to his middle school years, when “Tycoon” PC games enabled him to simulate running businesses. Henry majored in industrial and systems engineering at Morgan but became an information technology entrepreneur before he received his bachelor’s degree in 2010: he taught himself to program computers and develop software, and explored ways to monetize the websites he developed. His first job after graduation was as a technology consultant for Accenture, and he has continued in the software industry since then. Henry worked closely with Omar Muhammad and EDAC on a series of annual “hackathons” — software development competitions — for Morgan students. He said the center was instrumental in handling the logistics and promotion of the events, which were also recruitment venues for Baltimore area tech employers. A search for passive income for himself led him to launch a real estate investment firm, HD Multifamily, in 2011. Henry praises EDAC’s work and its mission.

“I think it’s a rare asset that Morgan has,” he said, “a place where you can come with no knowledge of business and find all of the resources and coaching you may need to go from A to Z, and do it outside of the normal classroom setting.” 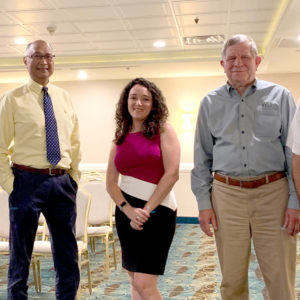 By: Cindy Atoji Above: CEAM officers at the association’s 2019 Conference in Ocean City, Maryland, in May: (left to right)...