For the past five years, Johnson has worked as a volunteer with a nonprofit organization named Black Girls Dive Foundation, as the group’s lead scuba diving, drone piloting and drone programming instructor. Now a lead instructor for DWP, Dr. Garrett has participated in some of the group’s most publicized activities.

Dwayne Johnson, from Brooklyn, New York, is an electrical engineer and an accomplished information technology (IT) professional. Melody Garrett, a native of Washington, D.C., is a medical doctor specializing in anesthesiology. These two Morgan State University graduates have big things in common besides their alma mater. They’re both strongly committed to uplifting Black youth, for instance, they both speak effusively about their love for their hobby of scuba diving, and both are delighted to see an organization they both work with, Diving With a Purpose, spotlighted in mainstream media, i.e., National Geographic, with the help of another Morgan alum.

Nat Geo’s Into the Depths is a six-part podcast that follows members of Diving With a Purpose (DWP) on their journey to find and help document the sunken remains of ships used in the transatlantic slave trade.

“I think it is really awesome, because this work has been going on for a really long time, and finally it’s getting some recognition,” Dr. Garrett says.

“I think it’s timely,” says Johnson, “especially if you look at the other strides that have been made by National Geographic since it was purchased by Disney. Will Smith just had a Nat Geo series…. I just like how they’re changing the face and the age of the (National Geographic) ‘explorers,’  because in the past, explorers have been older white men or older white women.”

At age 52, Johnson seems to be in his prime. For the past five years, he has worked as a volunteer with the founders of a nonprofit group named Black Girls Dive Foundation. He designed the dive component of Black Girls Dive’s curriculum, helping the organization connect more Black girls with science, technology, engineering and math (STEM) and prepare them for careers as scientists, environmentalists and other STEM and STEM-related occupations.

Johnson, of Morgan’s Class of 2001, also has an impressive ‘day job’ in the IT world, having spent 11 years at Booz Allen Hamilton, where he rose to the position of lead associate managing a 28-person team, and five years at Lockheed Martin Corporation, working in software and systems engineering and managing the site’s Engineering Training Program. For the past 10 years, he has been with a privacy and cybersecurity firm named TransTechSol, where he was the second employee hired and is now director of technology.

Black Girls Dive’s co-founder and CEO, Nevada Winrow, Ph.D., says Johnson is invaluable to the group, as he fills the role of lead instructor and safety officer for the organization’s scuba diving, drone piloting and drone programming activities at its three locations: in Owings Mills, Maryland; Trenton, New Jersey; and Atlanta, Georgia. Johnson also introduces the program’s students to underwater archaeology through Diving With a Purpose, giving tangible history to the girls — who range from 9-year-olds to 12th graders — by teaching them to draw, measure and map the wreckage of ships that may have been used to transport enslaved Africans.

Johnson’s work with Black Girls Dive flowed from his earlier experience with a nonprofit he launched in 2010, named Charm City SCUBA, which has offered diving instruction and STEM learning opportunities to youth in Baltimore, including students at Digital Harbor High School and Heritage High School, two public schools in the city.

It seems a far stretch: from a childhood with a single mother in a small apartment in a somewhat tough neighborhood in Brooklyn, to the vanguard of cybertechnology and the great outdoors underwater. Johnson doesn’t dwell on having ‘beat the odds,’ however. He focuses instead on the experiences he’s had and how he’s been helped along the way.

“Ultimately, I want to use my walk — past pains, lessons learned and passion-projects — to help some youth or young adult walk in their God-destined path,” Johnson says. “That can only be done by exposing them to many different paths and letting the spark do the rest.”

At Morgan and most other HBCUs, they will love you to success.

Johnson became involved with scuba about seven years after he graduated from Morgan with his Bachelor of Science in electrical engineering. The first member of his family to attend college, he had spent most of his undergraduate career at Morgan as a nontraditional student, working full time and paying his own way through school, one semester as a time, as his finances allowed. He also found his passion for teaching STEM to youth during his time as a student at the University, volunteering as a mentor with Morgan School of Engineering’s Saturday STEM Academy in the early 1990s, teaching web design, basic information technology and math to 5th through 8th grade students.

Morgan also became a pathway to his expertise in scuba. He tried the sport on a whim, on his 38th birthday, but was discouraged from continuing when his instructor implied that Black people weren’t made for scuba.

About two years later, Johnson was visiting Morgan’s School of Engineering when he saw a promotion for a student club named MSU SCUBA. Through the club, he connected with “a whole world of Black scuba divers,” including the Underwater Adventure Seekers (UAS) — an African-American group founded 50 years earlier — and the 2,000-member National Association of Black SCUBA Divers (NABS), Johnson says, a connection “which of course broke the myth that Blacks can’t float.”

Determined to give other African Americans a better welcome to scuba than he had received, Johnson obtained his Professional Association of Diving Instructors (PADI) certification and formed a team to launch Charm City SCUBA, with the goal of introducing youth to scuba diving and marine sciences as viable career options.

Melody Garrett is likewise happy to be among the stereotype-breakers.

“There are so many people who think that Black people don’t swim, you know? ‘What? There are Black scuba divers?’ That blows people’s minds, just to begin with,” Garrett says, “and then, for there to be a collection of us who are actually doing this kind of work, where we gather information and put it together to tell our own story ourselves.”

It gives (the kids) a wonderful feeling and self-esteem, knowing their worth, knowing their value, knowing where they came from. And we enjoy doing things like that.

‘The More You Learn’

Garrett was raised in Charles and Prince George’s Counties in Maryland and comes from a family that boasts a long line of Morgan graduates, among them an uncle, three aunts, two cousins and Garrett’s youngest son, Nicholas, who graduated from MSU in 2004. Her Aunt Vera was an especially strong influence on her college choice, Garrett says, bringing her young niece to campus for two- or three-day visits during spring break, in the mid-1960s.

“I always knew I was going to Morgan. I only applied to Morgan,” she says with a laugh, and adds that her time as an undergraduate did not disappoint. “My experience at Morgan was awesome. It is the best time of my entire life, I would say.”

Garrett majored in biology, served as a math and biology tutor and resident assistant on campus and thrived on the encouragement and support of her Morgan professors. At the end of her sophomore year, she decided to take the pre-med track, then, in 1978, took her Bachelor of Science and her stellar academic record to Georgetown University School of Medicine, where she earned her M.D.

Like Johnson, Garrett tried scuba diving late, during a cruise when she was in her 50s. She enjoyed that little dip into the sport, and, later, when a childhood friend invited her to join the Underwater Adventure Seekers’ Washington, D.C., chapter, she was pulled into scuba fully.

“In the Underwater Adventure Seekers is where I learned about DWP,” Garrett says. “Dr. Albert Jose Jones was the founder of UAS and NAB and was very involved as a board member of DWP. He would always promote the organization. I took my first training with DWP in 2012 or 2013, and I enjoyed it. I liked the scientific part of it, the marine archeology. Some people do the coral restoration, but that’s not my thing,” she adds with a laugh. “I learned the techniques and find it fascinating.  The more you train, the more you learn.”

Garrett says she’s learned, among other things, to respect but not fear sharks. Now a lead instructor for DWP, she has participated in some of the group’s most publicized activities, among them the dedication of a memorial to five Tuskegee Airmen who died during training flights in Michigan, appearances in actor Samuel L. Jackson’s documentary series Enslaved, and inclusion in a photo displayed in the National Museum of African American History and Culture.

A longtime volunteer with Big Brothers Big Sisters, Garrett has found many more opportunities to teach and mentor children and teens as a diver, in the U.S. and abroad.

“We work with youth (through a program called Youth Diving With a Purpose), and when we travel to different places, we always try to do a cultural event to somehow engage local people, and especially the younger people, in some kind of activity,” Garrett says. “We’ll partner with them as volunteers, maybe to clean up a beach.”

Before the COVID-19 pandemic, DWP was holding regular training courses for Black youth in Costa Rica, an activity they plan to resume this fall.

“Some of the kids, interestingly, are actually descendants of the survivors of a shipwreck, and they know their whole history,” Garrett says. “It was the Fredericus Quartus, a Danish slave ship, that was wrecked right there in Costa Rica in the area called Cahuita (in 1710). The water was so shallow that many of the enslaved people just jumped off the ship and ran up into the mountains, so to speak. They stayed there, and some of the kids we worked with a couple years ago are descendants of them. We let them work and train with us, helping us do the documentation of the shipwreck, looking for parts.

“It gives them a wonderful feeling and self-esteem, knowing their worth, knowing their value, knowing where they came from,” Garrett says. “And we enjoy doing things like that.”

Growing young people’s self-esteem is high on Johnson’s agenda, also. Like Garrett, he is aware of the power he holds as a role model for Black youth, and he uses the same strategy that helped him as a young man at Morgan.

“At Morgan and most other HBCUs, they will love you to success,” Johnson says.

His own success has included many setbacks, he knows, a fact that he impresses on his young students: “I try to be honest with them…in hopes that they will hear it and try to take a straighter path.”

His career path wasn’t linear, but Johnson’s ‘mistakes’ may have nurtured his best qualities: patience with young people is what makes him so important to Black Girls Dive today, says the CEO, Dr. Winrow.

“It’s his patience, his willingness (to give) second and third chances, and his understanding that mistakes are just part of the learning cycle…” she says. “Diving isn’t easy, especially when you’re younger. He takes his time, he puts humor in it, and there is a lot of repetition, because he recognizes that we need to meet each student where they are.” 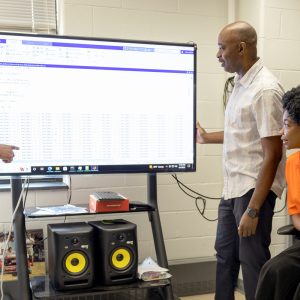 Most important to the CAP Center’s goals, it is now the home base of 23 students working toward the Ph.D. in Secure Embedded...